My film is about power and revolution. About people who set aside their fears and rose up against a force which was believed to be eternal and invincible. It is about the lost treasure of the revolution as described by the philosopher Hannah Arendt in her writings. It is difficult to put this treasure into words and thus it quickly disappears and fades from memory. My film also closely examines the failure of the revolution, which is essential to unearthing this treasure. And it takes a look at me, the author, who features somewhere in the history of this period under the name of Hassan, targeted by the secret services. Hassan is under surveillance. The aim is to recruit him as a secret agent.  While editing the film, I named a particular scene from historic footage of the Iranian revolution “house under construction”. Why “house under construction”? The footage firstly depicts a group of young women, men and children, arranged as if posing for a group photograph. The camera then zooms out and more and more people gradually come into view, perhaps over a thousand. They are sitting and standing close to each other, spread over six floors of a building which is still just a shell with no facades. Many of them have their arms raised in the air and are chanting slogans. They are all looking in one direction, in the direction of the camera. Towards the end of the shot, a protest march comes into view, passing by the building below. The slogans drifting down from the shell of the building are echoed by the protestors on the street.

I had first viewed this scene in an editing room at the Ministry of Culture and Islamic Guidance in Tehran. I was determined to get a print for my film. The scene struck me as an iconographic, staged depiction of a revolution. A few days later, I met one of the cameramen who had been involved in filming this footage. Should I believe his story that the people had gathered spontaneously and spread across the shell of the building without anyone telling them what to do? Is it conceivable that a large group of people would come together just like that and produce a scene that looked as if they were following instructions from a director?

I did not believe that this scene was authentic. Perhaps this is why I gave it such a strange name in the shot list – “house under construction” – robbing it of any significance. It took me a long time to decide where to fit this shot into the edit. I ultimately decided to put it at the beginning of a sequence which examined the question of narrative style when revisiting a revolution.

Many of the questions that came to my mind while editing this film still remain with me today. Why is it that films and photographs from the revolution in Iran nearly always feature large crowds of people? And why do these scenes nearly always look like classic images of a revolution? And why was I unable to find film footage in the Polish archives which contained the images we expect to see in a revolution?

The revolution in Poland: I see tense, thoughtful faces; hear the statements of striking workers: We’ve had enough of the lies, the Party officials must talk to the workers if they want to find a way to coexist peacefully… I see men in groups in the shipyards of Gdansk, listening to the talks between the strike committee and the government delegation which are being broadcast through loudspeakers across the grounds. No one can be seen chanting slogans, on the streets protesting, with their fists in the air; just a sea of thoughtful faces. Yet this footage is a cinematographic testament to a historic revolution.

Perhaps this is because the revolutionaries are confronting a different type of power. The Party in real existing socialism attributes its power to the proletariat masses, to a previous revolution. The Party alone dictates the way in which the masses appear in public space. Is it enough if this proletariat forms a movement, calls a strike and occupies the factories? And on the other hand: the ruler in Iran, the “king of kings”, legitimizes his power through bloodline, through a monarchic tradition and through history. Is it possible that the decisive presence of the masses in public space is necessary in order to destroy this tradition, this history and legitimization of authority? And what are the consequences?

The words Kapuscinski used to describe the revolution in Iran in his book “Shah of Shahs” come to mind: “A revolt frees us from our own ego, from that everyday ego that now suddenly strikes us as small, nondescript – alien. Full of astonishment we discover unknown energies within ourselves, we are capable of a nobleness that we would never have thought possible. But there comes a moment when the mood burns out and everything ends. All of a sudden, our fellowship crumbles and everyone reverts to their old ego, which pinches at first like ill-fitting shoes – but we know that they are our shoes and we are not going to get any others. We look into each other's eyes only reluctantly, we shy away from conversation, we no longer need each other.”

In this passage, Kapuscinski wonderfully captures the essence of the mood that gripped people – myself included – during the revolution in Poland and in the period that followed, shortly before and after the imposition of the state of war. Yes, precisely that: in Poland. In his book about the revolution in Iran, was Kapuscinski in fact describing what he had experienced in his own country? While researching this film, I submitted a request to view my Polish secret service file. I found extensive material, strange material. I discovered something that a few of my friends had predicted: a fictional universe. How and on what grounds does the head of a secret service department decide to place a young journalist (me) under 24-hour surveillance for one month, using twelve agents working three shifts? How is it possible that a secret service analyst comes to the conclusion that I work for one of NATO’s secret service agencies? How is it possible that a colonel from the intelligence services develops an intricate plan to put me under pressure in order to recruit me as an informer for the state security services and the intelligence agencies? Apart from feeling slightly ludicrous that secret services seemed to think I was worthy of such attention, the case also throws up questions about the internal workings of an institution which tries to justify its existence with absurd, highly irrational and sometimes incredibly dangerous decisions and actions. Is it perhaps an attempt to continually reassure itself of its own significance? Or does it reflect the extreme level of helplessness felt by the state authorities as they faced an impending revolution?

The beauty of the undetermined. I recently read this phrase in the feuilleton section of a newspaper. These five words brought back the feeling that had gripped me at that time in Poland, back at the end of the seventies when I was living in Warsaw as a research fellow. It felt as though everything that had ever happened in the country’s history could be found in the countless cracks of the present. And that the moment we were experiencing was just a temporary, precarious and fragile state. It was entirely inconceivable that it could continue to develop in any way, shape or form into the next present. Something major and unexpected would happen, leading to a radical break with the present. Strangely enough, there was something deeply liberating about this sense of living with something undetermined and inconceivable, and while working on my film I recalled the very special beauty of the undetermined. Perhaps I was searching for a way to understand more about this beauty, and that was the actual motivation – or at least one of the most important reasons – for my decision to make this film. 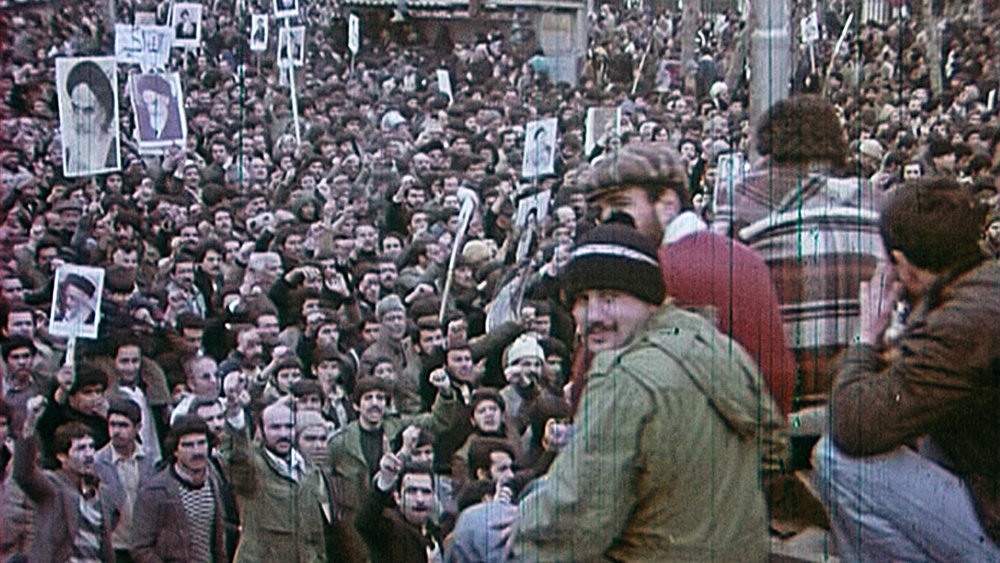